BILLY THE BONSAI BULL.  Giveaway.
Leave a comment for a chance to win this  little chapter e-book .

Billy the Bonsai Bull is an Australian true story told from the little bull's point of view.
Billy is a stubborn, orphaned calf who is losing the battle to survive. Hope revives in an unexpected way, through the milk bottle he detests, and brings him a sense of belonging.  However, it takes more than a place in the pecking order for this little white bull to thrive. It takes a miracle. 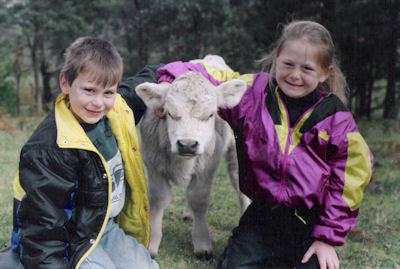 Although I wrote Billy's story to touch adults who understand cows and their behaviour, and for those who have an affinity with animals, the issues of loneliness, bullying and depression could resonate with children.

Excerpt:
The calf padded forward. He looked into his mother’s face and mooed softly. Her glazed, weepy eyes no longer focused on his. He nibbled on her ear. She didn’t stir.

The farmer’s wife sighed and reached forward to pat his head. “Come on, little bull. I’ll get you a nice warm drink. What do you think of that?” His hair bristled. Without his mother’s protection, he didn’t feel comfortable with these people. He darted away to the safety of a gum tree.

“This calf will be harder for you to rear than mothering a newborn,” the farmer warned his wife. “This one’s had the real thing for three weeks.”

“Maybe, but you’ll have to help me get a collar and lead on it. After that, how hard can it be? Besides, I must succeed. I promised Misty.”

The little bull waited till they walked up the hill and out of sight. He ventured out from behind the tree trunk and settled on a patch of dirt inside the hawthorn bush a short distance from where his mother lay. In his cave-like shelter he dozed, until a sudden, terrifying pressure on his ribs woke him.

The farmer’s knee pinned him to the ground. He squirmed and wriggled to his feet, kicking defiantly with his hind legs, but the farmer held him fast. The wife approached with a thin orange strap and secured the collar around his little neck. She picked up a bottle filled with a strange white liquid and pushed its rubber teat into his mouth. The teat smelled like the black boots on her feet. He eased it out with his tongue. She tried again. With her free hand she continually scratched his throat. He had to swallow. Then he gagged and struggled and spat and stamped on the woman’s foot.

She laughed and hugged him. “In spite of your tiny body and cute little face, you’re such a stubborn beast. You behave like a goat. A Billy goat! That’s what I’ll name you.” She stood and tugged on the lead. “Come on Billy, it’s me or nothing.”
More pictures of the real Billy 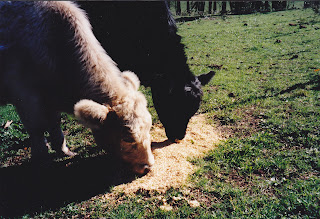 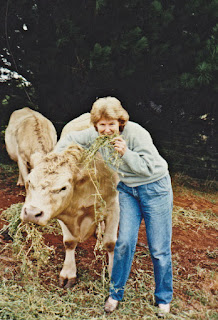 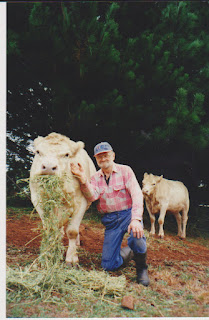 Available from  MuseItUp Bookstore - Billy the Bonsai Bull
and on Amazon.

I didn't expect to have so much fun finding myself in the head of a young bull. Seeing the world (and the farmer family) through Bill's eyes, is entertaining and enlightening. He refuses the icky smelling milk bottle, longing for his mother's rough tongue to lick his fur. When he settles for the stroke of the brush of the farmer's wife, an important first step is made. Fun not only for the young.

Billy's story will captivate young and old alike. This heart warming tale brings to life the struggles of a little calf as he faces the world alone. Wendy Laharnar writes with an authenticity possible only from her experience raising cattle in the Australian bush. Billy's stubborn nature could keep him from learning valuable, life preserving lessons. Readers discover an insight into farm life from Billy's perspective. From the first pages this beautifully crafted story hooks the reader. Billy's plight is poignant and written with passion. Put simply I found this to be a beautiful, rich, and heart warming story.  Congratulations, Wendy Laharnar. Another MUST READ.

This review is from: Billy the Bonsai Bull (Kindle Edition)

This beautifully written story follows the life a new-born bull through the unspeakable loss of his mother. He shuns all attempts made by a woman to feed him, which don't substitute his mother's warmth. With courage and determination, Billy must find a reason to carry on when bigger cattle shun him. Set in the wonderful surroundings of , the young reader discovers the abundant wildlife along with Billy as he learns what makes life worthwhile. The story will bring warmth to any heart.

This review is from: Billy the Bonsai Bull (Kindle Edition)

I very much liked the story of Billy. The author made Billy's blight and adventures come to life. Would very much like to read more from Wendy and look forward to future releases. 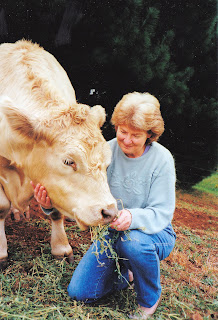 I hope you and your children come to love Billy as much as I do.
Posted by Wendy at 12:47

Aw, Billy is a darling member of the bovine species. Great pictures!

Lovely photos. Billy is such a great character. Another terrific post.

I'm going straight to Muse and buying it. It's been calling my name for so long. I'm sure my son Andre would love this since he's such an animal lover!

Sometimes the sweetest stories for children stem from real life experiences. I love the photos. Thanks for sharing in the Kid Lit Blog Hop and thanks for co-hosting with us this week.

Thank you ladies for stopping by and for your lovely comments.

Renee wins the ebook of my Billy's story. 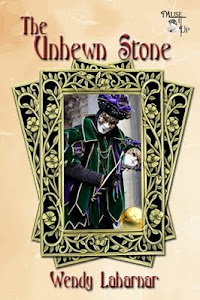 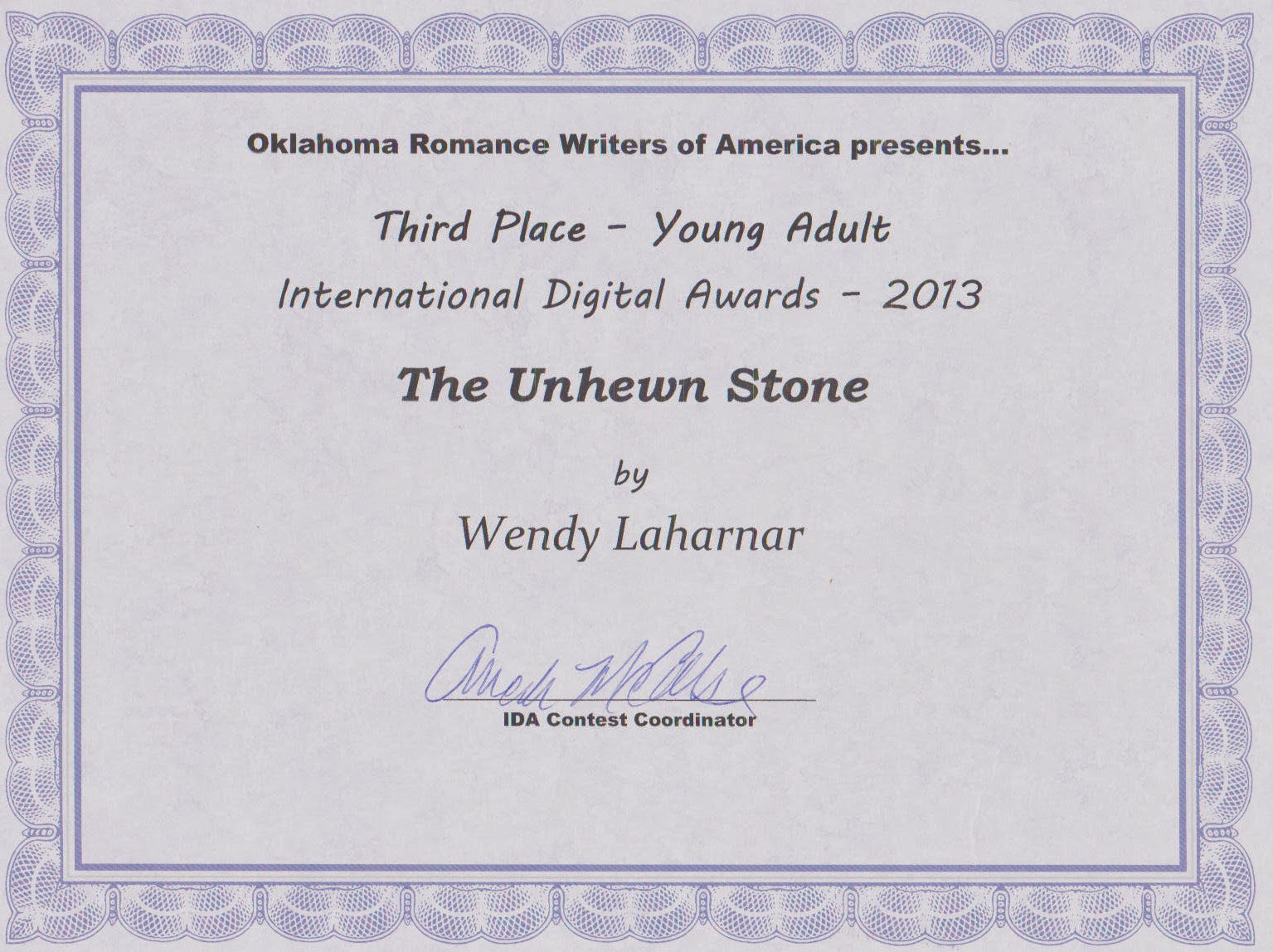 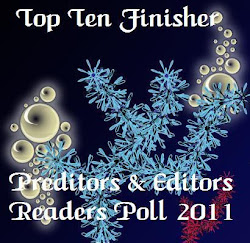 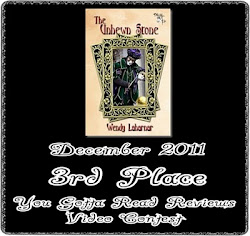